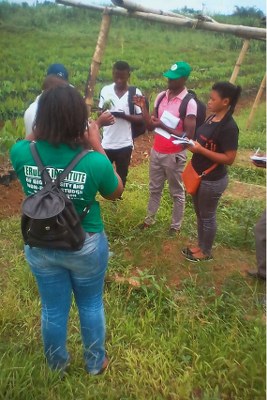 Some High School students in Meme, Manyu and Dian Division of the Southwest Region have expressed their determination to pursue a career in Biodiversity Conservation Studies when they leave high school. The students’ passion was articulated recently during one of ERuDeF Institute of Biodiversity and Non-profit Studies (ERuDeF Institute)’ outreach activity, February 25-27, 2015, to some high schools in the Meme, Manyu and Dian Divisions.

Aimed at grooming young Cameroonians for the future conservation and sustainable management of the country’s biodiversity, the ERuDeF Institute outreach team schooled the students on career opportunities in biodiversity conservation.

This team exposed the future leaders to programmes  offered by the ERuDeF Institute  like Agroforestry, Biodiversity Conservation, Environmental Journalism, Environmental Education, GIS for Development, Mountain Studies and NGO & Fundraising Studies. They told the students how each of these programmes can contribute to the conservation and sustainable management of Cameroon’s biodiversity and the future development of the country.

Given that most of the programmes offered by the ERuDeF Institute are still new in higher education curriculum, these students greeted the orientation exercise with lots of excitement.

An Upper Sixth student of GHS Ossing, Ashukem Moses Etchu recalled that people practicing agroforestry system in his community always have more financial returns especially in the  in the cultivation of bush mango, njansang and many others than those doing mono-culture.

Another student from GBHS Mundemda, Ndingi Paul Ekpeni, was so much interested in the Biodiversity Conservation Programme. He sought and was told what it takes to study that programme at the ERuDeF Institute.

ERuDeF Institute will in the weeks ahead replicate such outreach and orientation programme to some schools in the Littoral, West and Northwest Regions.