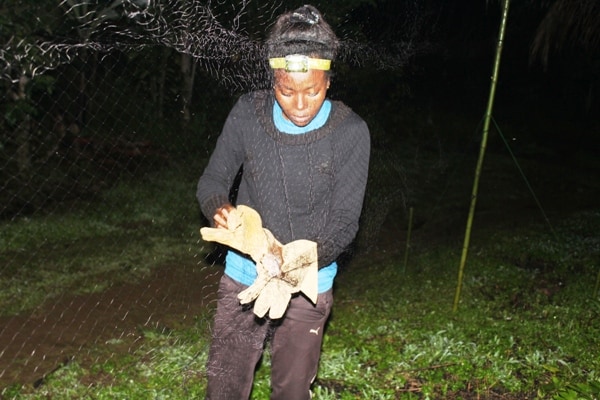 Wildlife Biologists from the ERuDeF Institute of Biodiversity and Non-Profit Studies (ERuDeF Institute) and the Cameroon Herpetology-Conservation Biology Foundation (CAMHERP-CBF) have just rounded off a close to two week inventory on the birds of Mount Muanenguba.

From August 20 to 31, a team made of ERuDeF Institute’s amphibians and reptiles coordinator, Grace Neba, alongside ornithologists (bird specialists) and chiropterolgists (bat specialists) from the University of Maroua, Congo Basin Institute and Dja Reserve were engaged in identifying birds and bat species at this emblematic mountain.

Two mist nets for birds were set up every morning. This according to Mr. Jean Michel Takuo from Congo Basin Institute was because most birds are active early in the morning. For bats, mist nets were setup every evening. The birds were also identified via point count. Some bird species captured during the survey, included but not limited to the Bannerman weaver(Ploceus bannermani) and Cameroon Blue-headed sunbird (Cyano mitraoritis).

“After this survey I now know how to set up mist net for birds, conduct point counts for birds and also how to collect and record data for birds and bats in the field. As a wildlife biologist in ERuDeF having broad knowledge on several wildlife species survey method is paramount.

From now on, I can confidently carry out any bird & bat survey required by the ERuDeF Institute or ERuDeF. Also I will be glad to teach my other colleague what I learnt in the field” She testified

Jointly organized by ERuDeF and CAMHERP-CBF, the expedition was conducted as part of activities for the Mt Manenguba project aimed at establishing a data base of all wildlife species within the proposed Mount Muanenguba Integral Ecological Reserve.