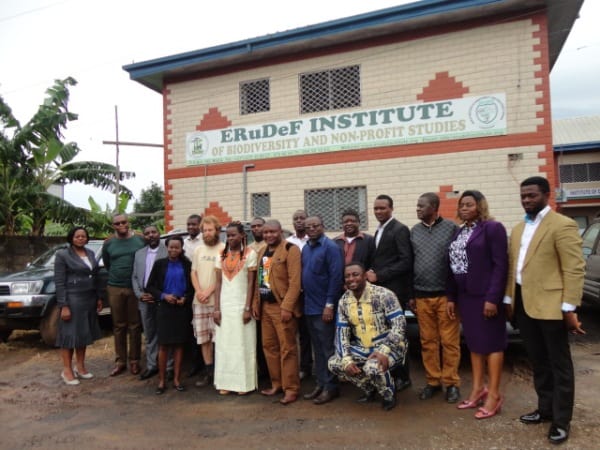 In inline with her objective of building capacities and saving species across mountains in Cameroon, the ERuDeF Institute of Biodiversity and Non-Profit Studies (ERuDeF Institute), has propelled the creation of the Cameroon Mountains Conservation Network ( CaMCoN). The creation of this Network came on the sideline of the launching of the Cameroon Mountain Conservation Initiative (CaMCI) organized recently by the ERuDeF Institute of Biodiversity and Non-Profit Studies (ERuDeF Institute) under the auspices of the Environment and Rural Development Foundation (ERuDeF). The newly created CaMCoN is aimed at collaborating with the Government of Cameroon, national and international partners, for capacity building, research and community livelihoods improvements across Cameroon Mountains. The creation of this Network was motivated amongst others by the fact that despite the unique biodiversity value of this global ecoregion (Lower Guinean forest) from various taxonomic groups, little conservation investments is given as compared to the Congo Basin forest and the Upper Guinean forest between which it lies. Speaking during the workshop that saw the creation of the Netwoek, the President/CEO of ERuDeF, Louis Nkembi. Who is also the President of the ERuDeF Institute, underscored the importance of conserving mountains biodiversity. “I realized from my over 20 years in the NGO world that most international organizations, which operated along Cameroon Mountains for the past two decades left without any exit strategy. These areas still remain important biodiversity hotspots and extinction issues need to be addressed,” Louis Nkembi explained On his part, the CEO of Tropical Plant Exploration Group (TroPEG) Cameroon, Mr Moses Sainge, in a presentation, Conservation of plants of Cameroon Mountains, Status and Challenges (Status, Challenges & Actions), highlighted key plant species across mountain ecosystems in Cameroon underscoring the need for conservation. “This region has over 250 plant species endemic to this area. It also has the highest number of threatened species. The ecosystem of the Cameroon Mountains have become fragile and it is a potential site that needs to be conserved” Mr Sainge reiterated. In a similar presentation, the CEO of the Cameroon Herpetology-Conservation Biology Foundation (CAMHERP) Dr. LeGrand N. Gonwouo, disclosed that the Cameroon Mountains play host to some 165 reptile species and 220 amphibians species with 182 of the amphibians species listed by the IUCN. These species according to him, are constantly threatened by human activities like bushfire, poaching, high degree of fragmentation, commercial logging, agricultural encroachments and others requiring a concerted efforts for their conservation. Besides these, the Director of the ERuDeF Institute, Akeh Nug, added that the Cameroon mountains is home to some 320 mammals species (of which 16 are endemic), and seven strictly endemic bird species also plagued with the same challenges. Pioneer member organizations of the Network include; the Environment and Rural Development Foundation, the Cameroon Herpetology-Conservation Biology Foundation, the ERuDeF Institute of Biodiversity and Non-Profit Studies, the Tropical Plant Exploration Group of Cameroon, the Kedjom-Keku Conservation Association for Sustainable Development, People Earth Wise, Cameroon Gender and Environment Watch, Community Action for Development-Cameroon, Sustainable Run for Development, Support Group for Sustainable Development and some University Researchers like Professor Fokam Eric and Professor ChuyongGeorge. The pioneer executives was put in place including AkehNug of ERuDeF Institute as Coordinator, Sainge Moses of TroPEG as Assistant Coordinator, Martin Mikes of Kedjom-Keku as Secretary and Wirsiy Emmanuel of CAMGEW as Assistant Secretary. MartinEtone of CAD came as the Finance Officer, Louis Nkembi pf ERuDeF as Chief Development Strategist, Shey* Benjamin Serkfem of PEW as Public Relations Officer while Dr.Gonwouo Nono of CAMHERP, Prof. Chuyong George and Dr.Fokam Eric of UB were the Scientific Advisors of the Network. The executive were given a 3 year mandate renewable once. The creation of this initiative was highly appreciated by member organizations. “Working in this area for the past 16 years I realized a lot of gaps. This network is the only forum that we can come together and sort out measures how we can safeguard the biodiversity of the Cameroon Mountains. I will do all I can through my participation to see that we conserve this rich biodiversity hotspots,” Moses Sainge, the CEO of TROPEG promised On his part, the Secretary of the Network Mr. Martin Mikes promised to ensure effective information dissemination within the Network. “I want to thank the ERuDeF Institute for this initiative and I pray as we gathered here today we will keep working together to improve on the mountain Ecosystem in Cameroon” Wongbi Prudence, representative of Community Action for Development corroborated. A target of 6 million USD was set for the realization of the network’s activities for the next 15 years (2032).