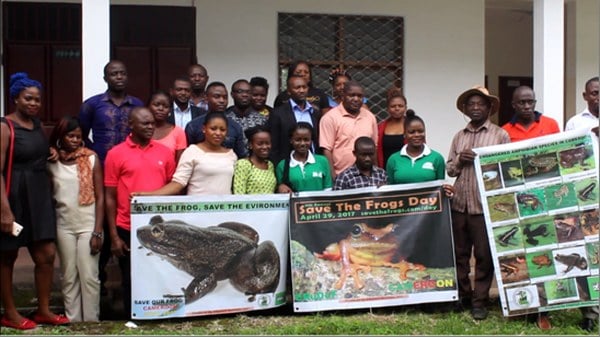 The ERuDeF Institute of Biodiversity and None-Profit Studies ( ERuDeF Institute) has launched a new initiative that will provide essential scientific information as well as support the conservation of amphibians in Cameroon dubbed the Cameroon Amphibians Conservation Initiative.

Launched last April, on the occasion of the World Amphibians Day, this innovative and multidisciplinary initiative comes to introduce a multi scale approach to research and monitoring of amphibians focusing on detailed investigations on few species in specific local sites throughout the nation, while monitoring a larger number of species over broader areas producing inventory documents on species occurrence and distribution.

According to the Director of the Institute, Madam Akeh Nug, the creation of this Initiative, is a response to the outcome of a baseline survey of the endangered frog species; Goliath conrua along the flanks of Mt Nlonako in the Littoral Region of Cameroon carried out by the Institute.

“The research we carried out revealed that amphibian population along the flanks of Mt Ntlonako are on a sharp decline, insinuated that these species may become extinct if drastic measures are not taking to conserve them. Reason why the ERuDeF Institute does not want to leave any stone unturned at ensuring that these wildlife species are conserved,” she said.

The ERuDeF Institute boss stated that the effective functioning of this Initiative will aid in reducing the rate of amphibians decline in Cameroon.

Joining counterpart institutions like Save the Frogs, the Helsinki Zoo, Amphibian Arc and the Scottish Royal Zoological Society in Amphibian Conservation, this Initiative in collaboration with the Department of Conservation at the Environment and Rural Development Foundation, will be at the forefront of studying amphibian populations and life history traits, measuring and monitoring environmental characteristics, and conducting research into potential causes of decline for these species amongst others.