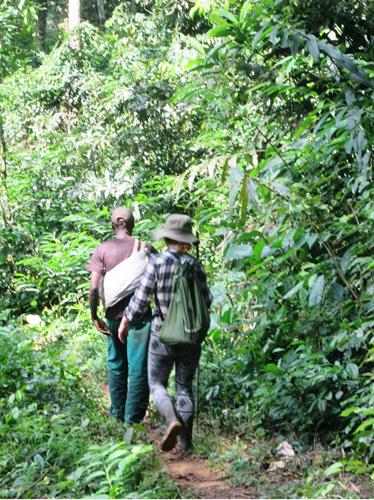 Last November 2017, the ERuDeF Institute of Biodiversity and Nonprofit Studies together with one of its volunteers, Cathy Besset for the first time went for a butterfly expedition on Mt Nlonako.

Mount Nlonako, found in the Littoral Region of Cameroon, is located between 4°49’-4°56’N and 9°56’-10°01’E and encompasses approximately 15,000 hectares. Though several expeditions have been made to this mountain by the ERuDeF Institute and other organisations, none have ever focussed on butterflies.

Together with Cathy Besset, a Scottish volunteer recruited by ERuDeF’s international partner, African Conservation Foundation (ACF) into the Institute’s International Volunteering Programme, for the first time, took to the flanks of Mt Nlonako to watch and discover the amazing butterflies in Cameroon.

For eleven days, the team hiked into and out of the rainforest, watching butterflies and taking pictures of the different species. The team also combed for butterflies within the communities surrounding Mt Nlonako like Magamba, Mbarka, Esingyam and Ndian-Ekom communities. The butterfly watching was an amazing experience as Mt Nlonako is endowed with many butterfly species with bright and beautiful colours.

Interesting enough, it was observed that butterflies concentrated more around communities than in the rainforest.

It was also discovered that butterflies and other wildlife species on Mt Nlonako are faced with habitat destruction as we heard and saw several chain saws at different locations felling down trees on Mt Nlonako indiscriminately.

The trip became even more exciting as the Scottish, for the first time, saw the world’s largest frog, The Goliath Frog (Conraua goliath). It was a thrilling experience; the butterfly expedition gave her the opportunity to have a face to face encounter with the goliath frog. However, this excitement died down as she observed the alarming rate at which these rare and endemic species were hunted. Bisset, who is a member of the British Butterfly Conservation Organisation in her efforts to help ERuDeF conserve these butterfly species and the dying forest of Mt Nlonako pledged to motivate and bring more of her friends and students from Edinburgh University to volunteer and conduct research on this unique mountain and its amazing species.