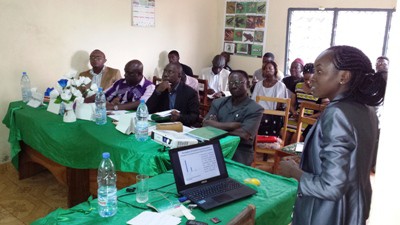 Some four landmark Masters of Science (MSc) theses have been defended in the area of biodiversity conservation and sustainable development at the ERuDeF Institute of Biodiversity and Non-Profit Studies.

The defence took place last September 8, 2018 at the Institute’s campus, Mile 18, Muea Road-Buea. The first thesis, defended by Angwa Gwendoline , was based on “Gastrointestinal parasites of Drills in the Korup National Park.

Motivated by hands on training acquired during her course work, this young researcher made some startling revelations from her investigation

“It was discovered that the drills of the Korup National Park have high protozoan nematodes and trimatodes infections. These diseases are said to have caused the death of Drills in other parts of the world” She disclosed.

Ms Angwa recommended that Parasites surveillance be incorporated in the biomonitoring of great apes to monitor parasite rates of species in the wild. Though already recruited as a biologist with the Environment and Rural Development Foundation, the ERuDeF Institute Conservation ambassador hopes to continue researching on the parasites affecting apes in the Korup National Park on a seasonal basis

Grace Niba, is another candidate, who also defended on this day. Overwhelmed by limited information about amphibians in Cameroon, this young researcher conducted a Survey on Amphibians of Mount Nlonako, Littoral Region of Cameroon: with focus on Goliath Frog. Her research induced some interesting discoveries.

“It was discovered that the distribution of Goliath frogs on Mt Nlonako is not uniform. They are located in most large streams at elevations of 200m and 1000m above sea level. Key threats to this frog species remains habitat loss and over harvesting. For example It was discovered that an estimated 19,440 frogs are harvested every peak season” she hinted.

The amphibians researcher recommended amongst others that awareness campaigns be carried out to sensitize communities around Mt Nlonako on the ecological importance of amphibians and the need for amphibian conservation.

Cont. from pge 1. On her part, Ntui Ebob Ojong Michelin, observing the increasing urbanization in Buea and a constant water crisis decided to focus her Masters thesis on the Assessment of Water Quality of Some Catchments in Buea, South-West Region, Cameroon. At the end of this research work, she is very happy contributing to science and development.

“I feel happy because this is a daunting issue plaguing everyone in the world today. Doing research on this topic and bringing science to life, makes me happy. I discovered that farming around water catchments, houses, animal dung and agricultural activities have effected the water making it microbially unfit for drinking. Houses located around this area have their safety tank around the catchment, which contaminates it” Ms Ntui explained.

The ERuDeF Institute graduate called on the Buea Council to carry out water quality assessment and develop policies that protect water catchments within the municipality.

. In the area of Environmental Education, Mr. Njume William Moto, explains that acquiring so much knowledge on the concepts governing the environment and the need for protection using education as a principal tool, he had to get into the minds of community members around protected areas to find out how much they appreciate biodiversity conservation. Thus, his research work is focussed on the Assessment of Community Awareness on Biodiversity Conservation in Tofala Hill and proposed Mak-Betchou Wildlife Sanctuaries in Lebialem Highlands.

At the end of the defence, one of the Examiners Dr. Fokam Eric could not hide his feelings about the quality of the thesis defended. “I am extremely pleased by the quality of research which the students have come up with. What we have been telling them and are sure they will implement is that they should be able to translate the results of their research into wealth, and to influence policy for the betterment of their communities” he said.

The Chair Man of the Defence Council, Professsor Chuyong George, on his part congratulated the candidates on their success. He appreciated them for daring in areas, which many young researchers in the country shy away from. The Chair Man also urged students to use their research results to influence government policy towards biodiversity conservation.

It trains both national and international students and researchers in the area of Biodiversity, Agroforestry, Environmental Journalism, Non-profit and Fundraising Management and Environmental Education. The school has graduated over 33 young leaders in conservation