Learn to Fundraise at ERuDeF Institute 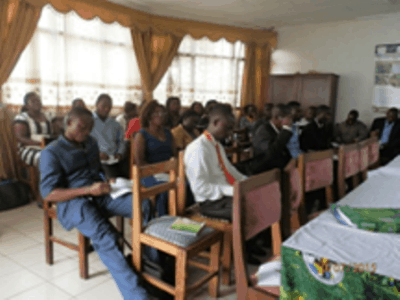 Many NGOs, CIGs, and associations are conceived in the morning, born at midday and they die at sunset, says Rev. Fr. Herbert Neba Cheo, Director of the John Paul II of Theology (JOPASIT), Buea. The Reverend Father was speaking at the launching of the Fundraising for Future Leaders Programme at the Delegation of the Ministry of Forestry and Wildlife. The programme is spearheaded by the ERuDeF Institute of Biodiversity and Non-Profit Studies based in Buea, Southwest Region.

Rev. Fr. Neba’s eulogy for short-lived non-profit organizations aptly captures the fate of many of these groups in Cameroon. And there are a number of reasons why many of them die at birth.

“Some NGOs are founded on the next of kin basis, and once the funds come in and are used up, that marks the end of the NGO,” said Louis Nkembi, ERuDeF CEO.

Mr. Nkembi added that there is need for money to run NGOs and it is not enough just to create NGOs; they do not automatically bring in money.

“Organizations need resources to grow but they do not design programmes to attract funding. All personnel in NGOs should be able to raise funds, not only one person. This will require precision training,” said Nkembi.

In his opening speech, the Deputy Director of the ERuDeF Institute of Biodiversity and Non-profit Studies, (ERuDeF Institute), Ngueping Samuel, said “many charities often struggle to recruit fundraisers for key roles but are unable to find a strong enough pool of applicants with the right level of skills and expertise [to raise funds]. It is in order to bridge the fundraising skills gap that the ERuDeF Institute launched this comprehensive programme to respond to the present needs of future leaders.”

Other key speakers harped on the need for strong, broadminded and focused leaders imbued with sharp managerial skills.

“Those heading NGOs should blend leadership and managerial skills,” said consultant Taboko Samson Menge as he talked on the role of leadership in NGOs.

Expounding on the role of leadership, Singeh Emile, representing the CEO of Go Ahead Africa, warned that leaders should be results-oriented rather than reason-oriented.

“Perceptions determine our thoughts; our angle of vision influenced by our cultural, religious beliefs, social and generational orientations can limit us, so we need to broaden our vision to help us to have a real picture of the situation. As a leader, it is important to always identify the bright spot and act on that. Look for what works, not for what does not work. Look for positive things,” said told the participants.

Meanwhile, Ita Nawom Seemndze, ERuDeF Institute official, said the institute is setting the pace in conservation leadership in Africa, and by doing that ERuDeF is trying to shape up the minds of young Cameroonians to be hardworking, focused and responsible.

“There are funders out there eager to offer funds for development but you need to be able to write grant proposals that will attract those funds. That is why ERuDeF Institute has launched this fundraising programme for young leaders,” Ita said.

Drawing the curtains on the workshop, Louis Nkembi reeled out the set of courses of the programme and urged Cameroonians, young and old, to enrol into the programme “and begin to see things beyond the ordinary, become an innovator rather than stringing together with the crowd. Organisations are looking for people who can bring in funds.”