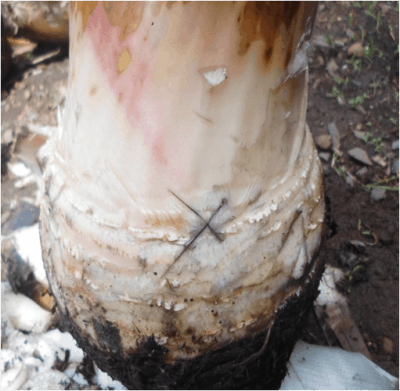 I am Ndutu Marie, a third-year Agroforestry Management Student at ERuDeF Institute of Biodiversity and Non-Profit Studies, Buea. My desire has always been to acquire skills that will help me make a difference in the society. Soduring the long holidays, I decided to apply the knowledge and skills I had acquired for my close to two years of undergraduate training at Institute on plantain multiplication in my community using the PIF technique.

I begged for a piece of land from my father, constructed a propagator and a shed and nursed 13 plantain cons. I had earlier nursed seven of them for a control experiment.

The cons stayed in the propagator for two months to be mature for weaning. After the plantlets were weaned, I left them in the nursery for two months for gradual acclimatization. After this, I transplanted them to the piece of land my father had given me and fenced it against stray goats.

My neighbours were really marveled by the success recorded this far and started asking me lots of questions about this new technique, which I explained to them. I actually felt bad because they started asking questions and getting interested only when I was carrying out transplantation which was already late for me to get them involved.

Having transplanted, I monitored their growth and found out that they were growing very well and I was very happy and proud of myself! I had never watched plants grow in the field like this before.  With this rate of growth, I am sure of harvesting the fruit of my labour within the next eight to nine months.

With the success recorded in this experimental phase, I intend to upscale so that I will also give out some plantlets to other farmers to test on their farms.

I have realized that there is no magic in this; you just need to use the right tool at the right time to do the right thing and you will derive the right result at the end. Do not fail to believe in yourself and don’t listen to what people may say when you know you are doing the right thing.. I say so because I wouldn’t have ended what I started. And to my community, I promise to bring them much more novelty in this domain.