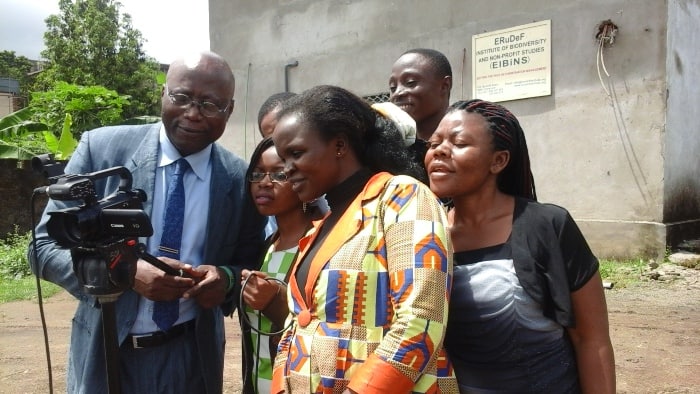 Trainees taking the Fundraising for Future Leaders’ Course (FFLC) launched at the ERuDeF Institute in June 2015, have testified that the course is already helping them conceive fundable projects and effectively manage ongoing communication projects.

“The fundraising course is really enriching. I am already working on a concept note on the conservation of Tiger Wood (Mircorberlinia bisulcata), which is threatened on the IUCN red list thanks to this course,” says Tengem Adeline, Acting Coordinator of ERuDeF’s Mt. Cameroon Threatened Trees Project.

Tengem is excited by the course at the end of the Video & Photo Journalism component, barely four modules into the course.

She says they are able to conceive project ideas, develop concept notes and advocate for their projects using photos and video documentaries.

“I am now working on a documentary script which I will follow to produce a documentary on the threatened Tiger Wood and upload to the blog which I created thanks to this course, to lobby funding for my project,” quips Tengem.

She adds that the course, especially the video and photojournalism module, will help her to effectively communicate her project using pictures. “I had always had problems getting good pictures from the field for my project. The Communication Division has always complained that the pictures I bring back from the field are blurred, and not storytelling. But through this course, I have gathered skills on camera positioning, framing of shots, focusing the object and this will greatly help me in taking great pictures for my project.”

The Trees Cameroon Programme Coordinator for Littoral and West Regions, Payong Prudence, says beside writing a documentary script, she has learnt how to develop a story board and get shots that are chronological and storytelling.

“I learnt how to handle a camera and how to take various shots like the long shot, wide angle shot and close up. I have also learnt how to position myself with respect to the lighting condition and direction of sunlight to get great pictures for my project. The modules are really enriching,” says Payong.

For his part, Public Relations intern at the ERuDeF Institute, Nuatera Daryl-Palma, commented on the interrelated nature of the modules.

“We have done Introduction to Fundraising, Online Social Media, Research Methods and Scientific Writing and Video & Photojournalism, and I have begun to see how related the courses are in fundraising.  Through the course, I have understood that when you conceive a project idea you need to research on the subject area, get storytelling pictures or video documentary and upload to your blog to lobby for funds either through crowd-funding or to a specific donor,” Deryl-Palma said.

Reacting to this appraisal, the Acting Registrar of ERuDeF Institute, Ita Nawom, who is also the Course Coordinator, said she was happy that the course has already started achieving the purpose for which it was initiated; that of building a holistic capacity where staff and other participants are able to use the various modules to come up with project proposals which can attract international funding.

The Acting Registrar said those who have not had the opportunity to attend the course from the beginning can still join given that the course would be on a rolling basis.

She thanked the course instructors for their availability, sacrifice and willingness to assist trainees even after completing their modules.

The next module is Geography and Ecology which will run from November 23 to 27, 2015.

Organised in partnership with the St. Monica University, the course will culminate in the award of diplomas to candidates who succeed to attract funding for at least one of their projects.